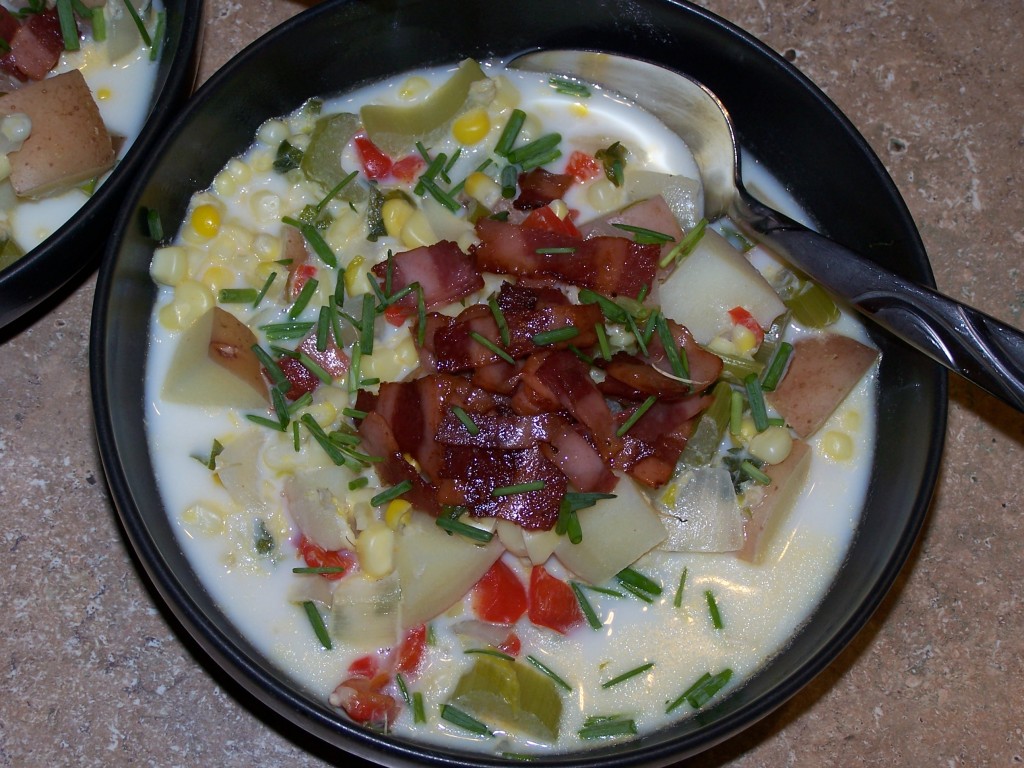 Oh, how I love Rachael Ray!  Here is my first (of many) blog posts with Rachael Ray recipes.  Bacon Corn Chowder.  Yum!  Robbie has been asking me to make this again for a long time now.  It just so happened that I had a ton of corn that needed to be used soon, and I couldn’t think of a better dish to make with it.
Ingredients:
8 ears of corn, kernels removed (reserve 4 of the cobs)
1/2 cup celery leaves, chopped
2 cups water
1 cup chicken stock
1 tablespoon EVOO – Extra Virgin Olive Oil
1/2 pound (about 8 slices) bacon, coarsely chopped
3 medium Yukon gold or red potatoes, peeled and cut into 1 1/2-inch cubes
1 medium onion, chopped
2 cloves garlic, grated
3 stalks celery, chopped
1 small red bell pepper, seeded and finely chopped (about 1/4 cup)
2 small bay leaves
4 sprigs fresh thyme (or a good sprinkle of dried)
1 quart milk
1 teaspoon (or more) hot sauce (Frank’s Red Hot is best)
3 scallions, sliced on the bias
First, you will need to remove the corn kernels from the cobs.  Peel off the husks and silks.  Get a big bowl and a small cereal sized bowl.  Place the small bowl upside down in the big bowl.  Use a knife to cut the kernels off.  The big bowl will catch all the kernels so they don’t make a mess all over the counter.  Brilliant!  (That’s a tip I have learned from Rachael Ray) 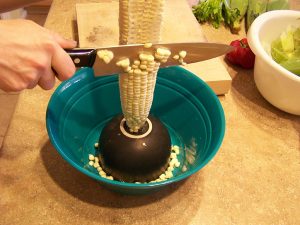 Simmer the 4 naked cobs, celery leaves, water and stock in a large pot.  Keep it simmering until it’s time to use it. 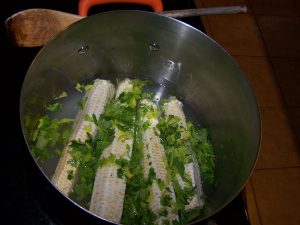 Crisp up the bacon (I used Turkey bacon) in a large pot over medium heat.  Set aside on paper towels on a plate.
Keep a couple tablespoons of the bacon drippings in the pot.  The turkey bacon didn’t leave me with much, so I ended up adding a tablespoon of EVOO.  Turn the heat up to med-high and add the potatoes, onion, garlic, celery, bell pepper, bay leaves, and thyme.  Saute about 5 minutes to soften the veggies a bit. 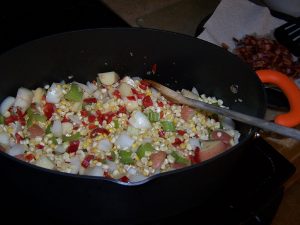 Pour in the milk, corn broth (minus the cobs), and hot sauce.  We had to add more hot sauce while we were eating because it wasn’t spicy enough for us.  Bring to a bubble, reduce heat and simmer for about 15 minutes until the potatoes are tender. 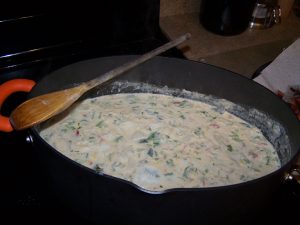 Garnish with the bacon and scallions.  I served it with a green salad as well.

This was very good and Robbie was pleasantly surprised with it.  Chloe even liked it…she ate a potato chunk and a few of the onion pieces. 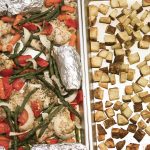