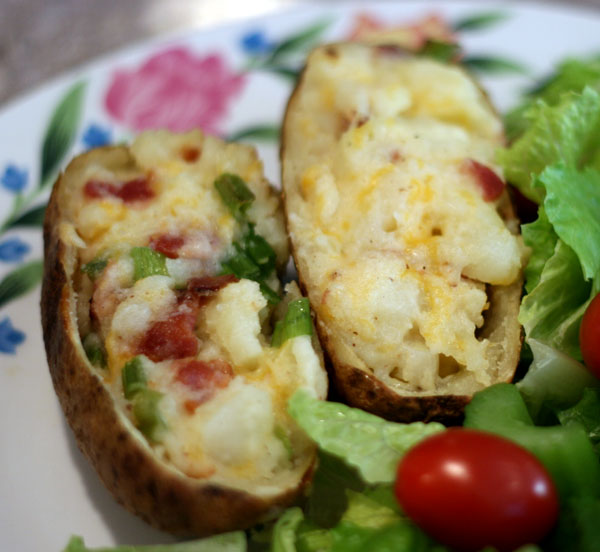 When I make Twice Baked Potatoes, I like to make a lot and stick them in the freezer.  They are great to have in the freezer for lunch or even an easy dinner.  As you can see in the picture, I forgot to save some cheese so sprinkle on top.  They were still super cheesy and delicious without the extra sprinkle of cheese.

Preheat oven to 400°F.  Poke several holes in the potatoes with a fork and place on a baking sheet.  Bake until very tender, about 1 hour and 15 minutes. Cool slightly before scooping out the insides.

Brown the bacon in a skillet over medium/high heat.  Drain on paper towels.

Once the potatoes are cool enough to touch, cut them in half lengthwise.  Scoop out the insides, leaving a potato skin shell.  Leave a little attached to the skin for some stability.  Put the potato insides in the bowl with the butter.

Mash the potatoes together with the butter, bacon and sour cream.  A potato masher works well for this.  Stir in 2 cups cheese and green onions.  Season to taste with salt and pepper.

Spoon the potato mixture into the potato skin shells.  Top with remaining cheese.

These can also be frozen in a zip top bag.  Baking time will be longer for frozen potatoes.

-Recipe inspired from The Pioneer Woman– 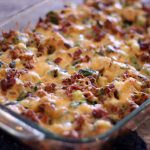